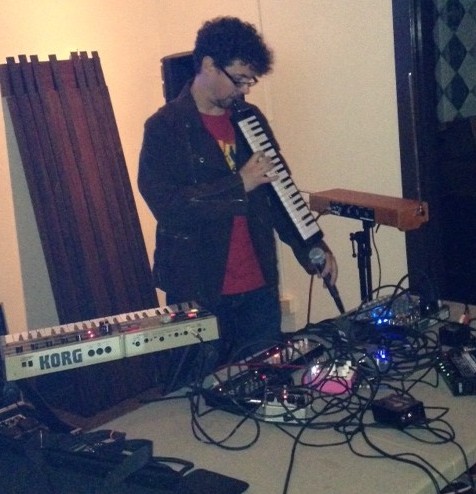 Paisley Babylon was added as a last-moment stand-in act for a group that couldn’t make the Friday night CIMMFest Shorts From The Winnipeg Film Festival show at Comfort Station in Chicago.

Paisley Babylon has been absent from the stage for a variety of reasons lately, but last night marked a much overdue return. The show included the usual theremin performance, but added spacey harmonica and melodica into the mix–something that’s been needed for some time. 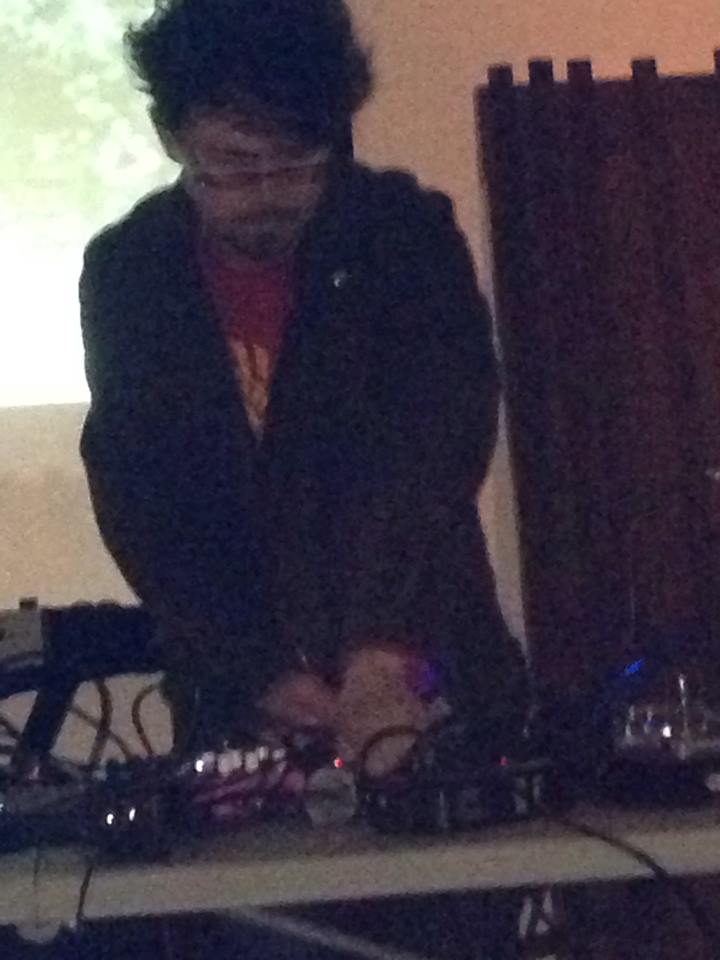 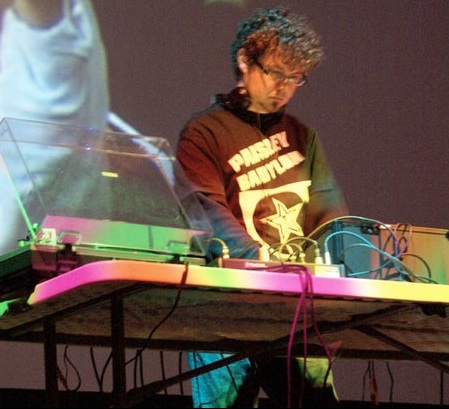 Paisley Babylon has been described in many, many ways. Dark ambient/goth/industrial is one of them. “A mix of Golem and Ennio Morricone” is another. I’m pretty sure that’s the German prog band Golem and not the deathmetal one.

One reviewer called Paisley Babylon, “ambient, trippy sample-laden psychedelia. If Funki Porcini is like ‘shrooming, then Paisley Babylon is like spending several hours in a flotation tank after ingesting a couple of hash brownies.”

Yet another said, “Warped, trance-inducing sounds…”

There’s a common thread running through a good deal of the comments about Paisley Babylon music. When not being compared to soundtracks by John Carpenter or even Goblin (a bit of a stretch, that one) there’s quite a lot of references to altered mental states, hallucinations, dreams and nightmares, highs of various kinds.

Paisley Babylon has always been about altered mental states. There are two or three really influential ones. A great deal of the first Paisley Babylon CD was written during sleep deprivation, and bouts of insomnia. Strange that those two would work together on the first record–you’d think that it would be one or the other somehow. If memory serves, it started out as intentional sleep deprivation and wound up turning into insomnia. Yikes.

But those strange mental places you go into when you haven’t slept properly, those odd thoughts and warped perceptions of things are what this music is all about.

To paraphrase Hunter S. Thompson, I would never condone using alcohol or other substances combined with extreme lack of sleep and a near obsessive/compulsive need to keep recording, playing back, and embarking on the mental flights/fugues/waking dream states this music tends to bring on…but it’s always worked for me.

I guess I am my own audience for this material. Anything that causes your perceptions to become strange, twisted, unfathomable or otherwise altered is a friend to me. Paisley Babylon could be called mushroom music, but I’d hate to be associated with psychedelics alone–ANY altered state of mind from fever dreams to near-death experiences IS Paisley Babylon, to me. The music you hear–or wish you COULD hear. What you might experience on the operating table or after a long night of tequila slammers and talk of Carlos Castaneda.

What Paisley Babylon is…is that feeling you get falling asleep at a film festival during one movie, waking up in the middle of another one, and that wonderful disorientation you have before becoming fully awake. Where you don’t know what’s real and what isn’t, what was just part of the half-dream you just had and what’s in the film itself–or even understanding which film was which.

Jet lag, drunken headphone magic, the 420 thrill of discovering new sounds in recordings you’ve heard for years, the previously mentioned sleep deprivation, the effects of fever and cough medicine, nodding and waking during all-night movie marathons, the feeling you get waking up during a sleep walking jag, highway hypnosis…all of these states and more inspire, help create and motivate Paisley Babylon music.

A really excellent example is the Paisley Babylon track titled, Ever Hear Me Screaming? This is posted in its entirety at Bandcamp and can be heard for free–all nine minutes and 59 seconds of it.

I use a variety of gear to get to these sounds, including analog synths like the Juno 106, Juno 1, Theremin, Yamaha CS-1X, MicroKorg, tape loops, turntables, found sounds, invented sounds, feedback loops and much more. In the past I’ve also taken samples of pop music, manipulated them into harsh, unrecognizable noise and played them as percussion sounds. I’ve even taken audio from old home video recordings to abuse, mangle, and turn into subliminal messages.

If you are a fellow sleep-deprived, altered state, chemically altered traveler, you’ve got a simpatico mind in Paisley Babylon. 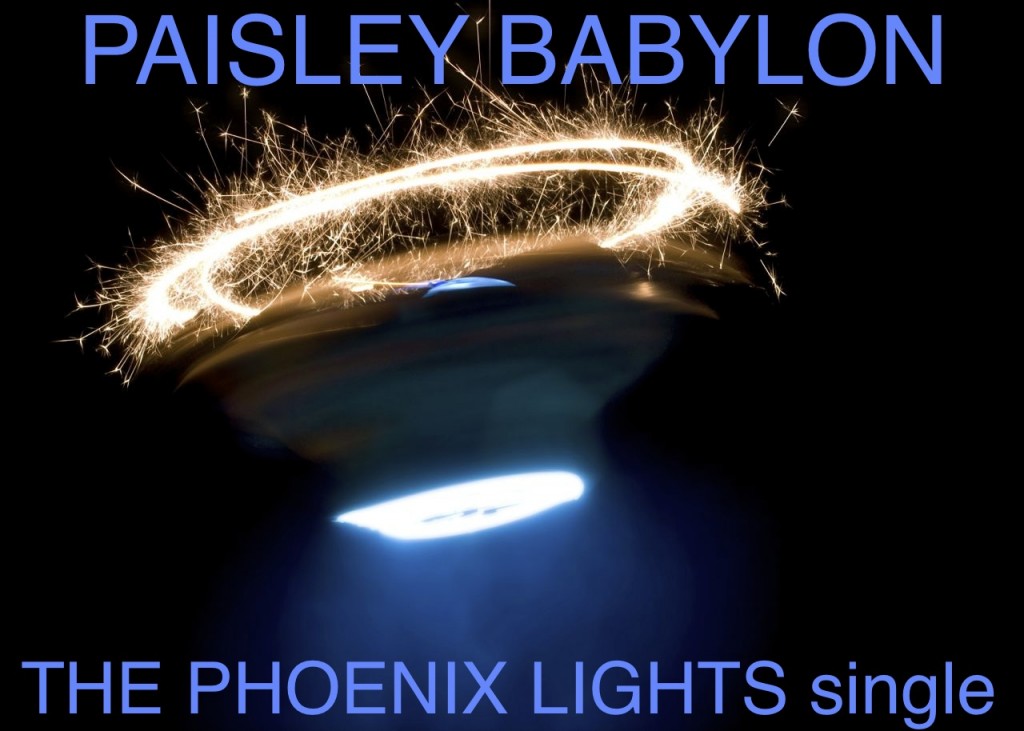 Written as a soundtrack piece (hence the repetitive theme that basically tries to pummel you into submission as you listen), the new Paisley Babylon MP3 THE PHOENIX LIGHTS, is a SkinnyPuppy-inspired track which does not yet have a home.

But there is some video work being shot in the Paisley Babylon studio that could act as a vehicle for it soon unless someone scoops it up in the meantime.

This track was inspired by a conversation with Nivek Ogre of Skinny Puppy at a recent horror movie convention (Horror Hound Weekend in Columbus, Ohio) about the nature and origin of the infamous Phoenix Lights unidentified flying object phenomena. After a couple of good chats with Ogre, it seemed like a good time to write something aggressive, analog, and old-school.

This track also marks the first with the new Paisley Babylon theremin, which was added to the gear roster earlier this week.

A video sculpture or similarly-intentioned visuals are pending for this track, it will be posted here when it’s ready…if you’re interested in licensing this track for a film project or other visual art, please feel free to get in touch: jwallace(at) turntabling (dot) net.

DJ Paisley Babylon is now booking dates for RETROMOD, a unique blend of British Invasion, 80’s era Manchester sounds, Melodic punk, Shoegaze and much more. If you have a club night, special event, or private party in need of a DJ night full of sounds by The Fall, Paul Revere & the Raiders, Velvet Underground, The Zombies, Charlatans U.K., Stone Roses, Kinks, X, and other similar sounds, contact me for additional details. See the contact details below for more information. You can also listen to a sample mix of what this night would sound like. 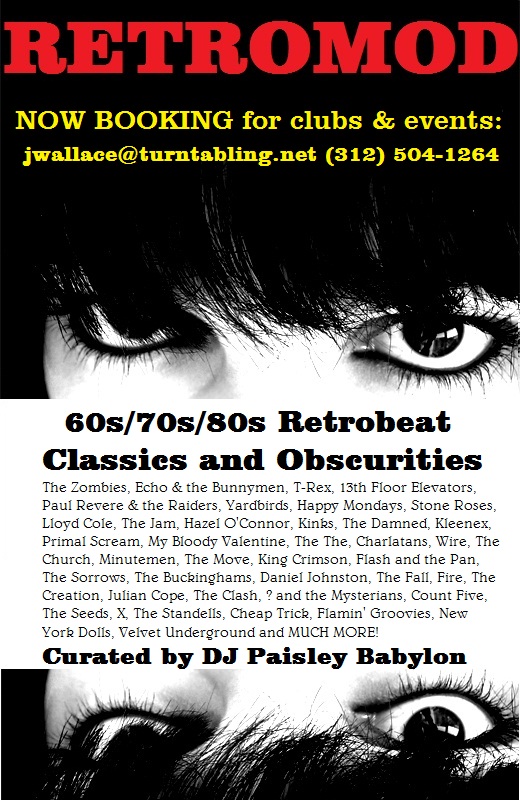 Booking information for clubs: RetroMod features both vinyl and CD mixing. If you aren’t equipped with turntables, they will be provided. Please get in touch by phone or e-mail to discuss booking.

Booking information for events, parties, individuals: DJ Paisley Babylon has PA gear suitable for a medium-sized room approximately the size of a hotel ballroom or convention area. If you need additional sound reinforcement, please mention it plus the anticipated size of the event. DJ Paisley Babylon is available for private events but a minimum of three weeks advance notice is required. Rates are negotiated individually based on the event. We do select work for charity, fundraisers, etc. Please submit as much detail as possible when booking.

I’ve been pondering the nature of sound and its artistic uses quite a bit lately. In today’s digital landscape, it never ceases to amaze (or please) me that audio-only projects are still of great interest in spite of YouTube, Netflix, cable television, etc. Like books, audio-only media isn’t going away, it’s just mutating, evolving, moving to more specialized audiences.

Print isn’t dead by a long shot, and neither is the audio-only format. Not all interesting media is visually oriented.

I started professionally in radio but transitioned into television and video. I spent a lot of time there but still love the audio-only format. I enjoy DJing, talk radio, podcasts, NPR, audio collages, mashups, musique concrete, found sound, audio surrealism, much more…but how to combine, collide, mash up, repurpose and reapproach audio in interesting ways using these formats not as the ends themselves, but as techniques? Sound is the canvas, but it’s also the paint.

I plan on exploring this problem with a series of productions in the near future. Something all at once old, timeworn and done before, but at the same time new and interesting. Collisions of the old and new. Part audio blog, part podcast, part mashup, part DJ, remix, etc.

The first steps will likely be a bit tentative–I’ve got some old material along these lines I only broadcast once or twice, but new material is being worked and coming soon. Over the weekend I plan on posting the first of a series of sonic experiments as a first step towards a regular series that will likely define itself and take on a life of its own as the concept develops.

This is all a bit murky–and not just to you, the poor reader stumbling upon this rambling for the first time. But as the journey unfolds, it will become clearer what the destination is to be. Here’s to the experiments!